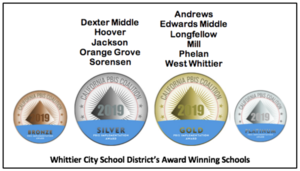 All Whittier City schools were awarded 2019 PBIS Awards. Read our press release for more information about this very unique accomplishment. Whittier City School District is proud to announce that all eleven of their schools were awarded either gold or silver recognitions by the California PBIS Coalition. This recognition demonstrates the District’s commitment to developing positive, responsive school cultures that support all student needs.

For the fourth year in a row, Whittier City Schools have been recognized by the California PBIS Coalition for excellence in the implementation of the core features of Positive Behavior Interventions and Supports (PBIS) for all students and targeted interventions for those students who need more support.  Three schools earned the Gold Award for a second year in a row: Andrews, Katherine Edwards Middle School, and Mill School and Technology Academy. Three elementary schools earned the Gold Award for the first time: Longfellow, Phelan, and West Whittier. The remaining schools earned the Silver Award, most for the third year in a row:  Dexter Middle School, Hoover, Jackson, Orange Grove, and Sorensen.

The PBIS initiative has evolved over several years.  Diana Zelezny, the Lead Psychologist for the Whittier City School District commented, “We started this initiative over seven years ago with pilot schools who committed to studying and learning best practices in PBIS.  Our school staff and administrators work collaboratively to support one another and continue to develop this work at every school site. Our schools have developed school cultures that are welcoming, safe, positive, and focused on the whole child.”

The awards reflect fidelity to national implementation standards supported by data that demonstrates students success as a result of positive behavior instruction.  In order to keep award status, schools are required to apply each year to ensure that schools remain vigilant in their implementation.

Superintendent Dr. Maria Martinez-Poulin celebrates this success and shares this special recognition with the entire Whittier City community, “On behalf of the Board of Education, we are very proud of our schools for achieving this special recognition and status. Congratulations to all of our schools and we thank our staff for their commitment to building positive relationships and supporting all students to be successful in school.”

All District programs and initiatives have the shared goal of instilling the critical 21st century skills of critical thinking, creativity, collaboration, and communication that students need in order to be successful and contributing members of society.  Safe, nurturing and collaborative school cultures are fundamental to that work.